In honor of this week's British Open, here is a piece I did last year. 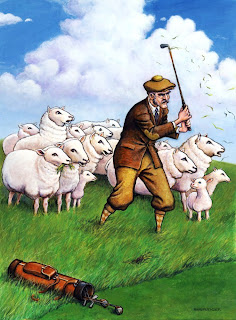 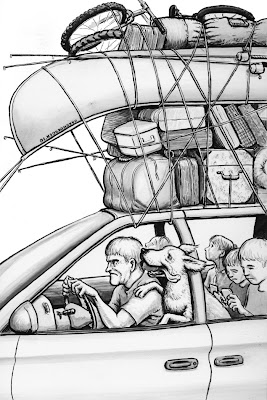 Here's another illustration from Steve Paul Barlow's "I'd Rather Get Blisters" (still available at Briar Hill Books). I remember trips like this when I was a kid. Four kids and two parents in an overstuffed station wagon with no air-conditioning. Fun times.
Posted by Dave H at 12:39 PM 1 comment:

I haven't done an Illustration Friday in a while. This weeks theme is "sweater". I did another sweater oriented IF picture for the theme,"flawed" a couple of years ago. I suppose I could just link to that one again and save some work, but that would be lame. So here's a new one. 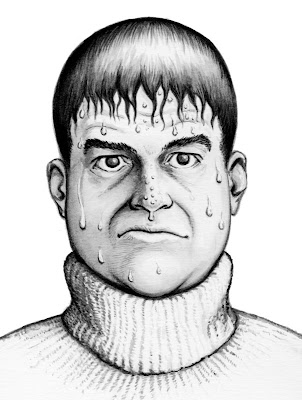 The next thing I do is to trace the image onto a piece of bristol board using my tracing box. My tracing box is actually a box designed to hang on a wall in a doctor's office and used to view x-rays. My wife found it at a garage sale years ago. It's lightweight so I can put it on my drawing table to use and lean it in a corner the rest of the time to save space. I don't pencil directly on the board because I want to avoid any erasing that might roughen the surface and effect my ink washes later.
I trace most of the lines in ink using a crow quill, trying to leave areas that will be completed in wash. The fisherman and the stream are traced in pencil instead of ink. I'm hoping for a sense of depth, so I don't want hard edges in the background. 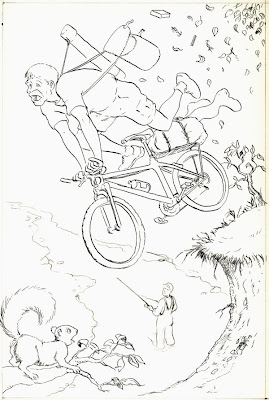 Next, I go over the lines with ink using a #2 watercolor brush. You get a more expressive line inking with a brush. Some of the pen lines are left as is. I start to fill in darker areas with black and add texture with dry brush. 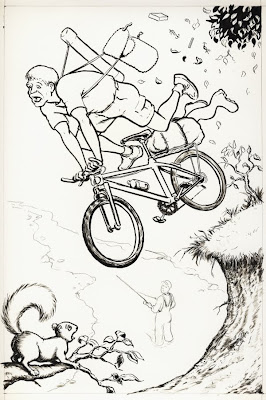 I then go over the drawing with a wash (ink diluted in water). Textures are added in wash. For example; the creel, Steve's hair and the background. Sometimes the wash is put down directly in one go and other times areas are built up in successive layers. I find that ink wash can result in a smoother finish than watercolor but it is not forgiving. Once it is down, it is down. 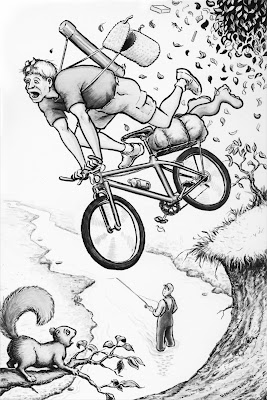 Lastly, I go over the drawing again in ink with a crow quill and brush, adding more leaves and textures. Then I only have find a place to hide my signature.
Posted by Dave H at 12:37 PM No comments:

I have once again been given the opportunity to illustrate a book by Steven Paul Barlow. Steve's latest, "I'd Rather Get Blisters", is now available at Briar Hill Books. I will put a few of the illustrations on the blog in the near future. I thought I would use the first one to show my process for doing a pen and ink wash illustration.

This illustration was for a story where Steve relates his earlier idea for using a mountain bike to get to and from hunting and fishing spots in the wild. Unfortunately, his bicycle skills are a little shaky. I decided to show Steve out of control on his bike. I started with a lot of loose sketches. 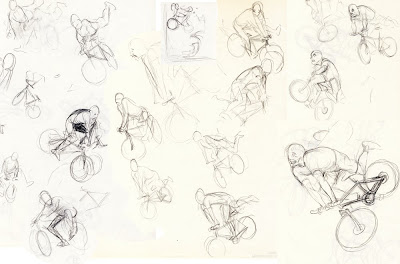 At this point I wasn't sure how out of control I wanted him to be. I downloaded some pictures of mountain bike crashes as reference. I decided to have him be out of control but not crashing
(yet). After I came up with a pose I liked (lower right), I drew a tighter sketch. I added a fishing creel and a pole case. I selected the fly fishing equipment because the looser straps would add to the feeling of motion rather than a backpack tight to the body. Actually, I've never asked Steve if he fly fishes and this scene doesn't actually happen in the story. But that's okay, my Artistic License is still valid. 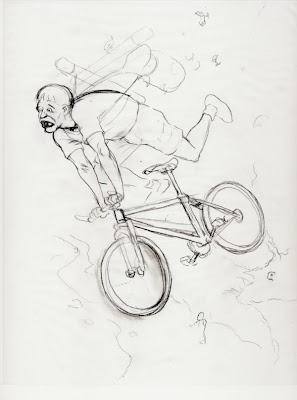 Next I trace the figure and bike in pencil on tracing paper tightening up the lines and adding stuff like the bike rack and boots. I worked on the background which I had only roughly indicated in the pencil sketch. The fisherman in the creek and the squirrel in the foreground are added because of my pet theory that a humorous picture is often funnier if there is someone in the picture reacting to the chaos. 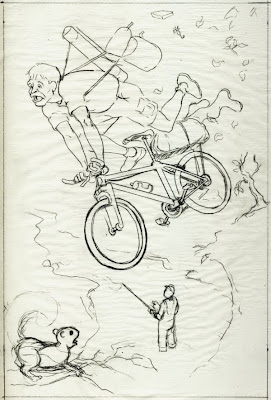 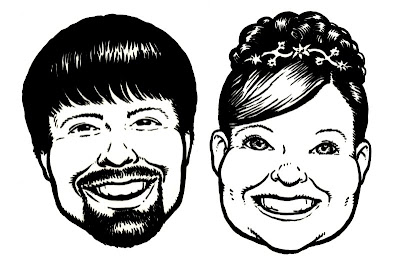 Here's a pair of pictures that I haven't been able to post until now. These are brush and ink drawings of my daughter and her new husband. We used them for place settings and to personalize gift bags at their wedding.
Posted by Dave H at 6:58 PM 2 comments:

Well, I haven't posted in a while. I have been working on pieces that I haven't been able to share. One of them was a pen and ink drawing for my daughter's wedding invitation. The invitations have been mailed and she has given me clearance to post it. So, here it is. 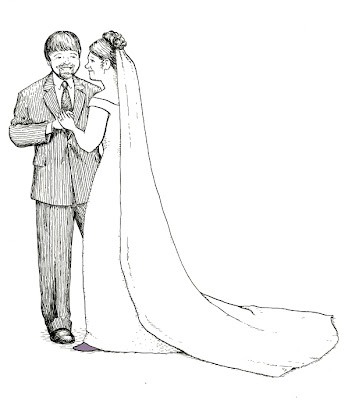